Award winning author and illustrator Lita Judge worked over 6 years to create Mary’s Monster (2018), an illustrated novel in verse, about the life of Mary Shelley, author of Frankenstein. Mary’s Monster has received nominations for both the Carnegie and Kate Greenaway medal, the UK’s most prestigious children’s books awards.

In her presentation, Judge will reveal Shelley’s remarkable life. Nearly everyone has some knowledge of Frankenstein, but few know that the author was a pregnant teenage runaway, rejected by her family and spurned by society. She changed the course of literature by inventing the Industrial Age science fiction novel, sculpted the first mad-scientist archetype, and delivered the most iconic monster ever created.

Mary Shelley deserves our attention. She was reviled in her lifetime for daring to love a married man, the poet Percy Bysshe Shelley, but she transformed her suffering into empathy and strength. Mary’s Monster is part visual fantasy and part feminist allegory. It tells the story of a young woman who set the feminist movement in motion by struggling to gain the right to have something as simple as a career within a political and social landscape carved by men.

Judge has published 26 nonfiction and fiction books, including One Thousand Tracings (2007), Red Sled (2011), Hoot and Peep (2016). and Penguin Flies Home (2019). Awards for her books include the International Reading Association Children’s Book Award, an American Library Association Notable, National Council of Teachers of English Notable Book, a Kirkus Best Book, and the Jane Addams Honor. Her work has been translated into 15 languages and her book, Flight School, has been adapted into an off-Broadway musical, currently playing in NYC, China, and touring across the country. She makes her home in Peterborough, NH, but travels extensively in America and abroad visiting and speaking at schools. 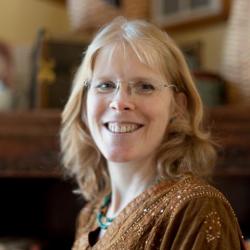