The future of our civilization will be determined by the technologies we invent and the wisdom with which we deploy them. Because the future is so immense, the moral imperative to nudge it in a positive direction dwarfs all other concerns.

Now is the best time to be alive. Do most people, or even most scientists and technologists, recognize this? Is the current research enterprise well-suited to dealing with this awesome responsibility by drawing on the collective wisdom of humanity?

Kevin Esvelt believes the answer to such questions is a blunt NO.  He is deeply concerned that much of scientific research today is conducted by small teams of specialists who cannot reliably anticipate the consequences of their work.  He believes that research must be shared and that wisdom is a collective virtue.  Esvelt sees the necessity of sharing scientific research as a moral imperative that offers both a burden and new opportunities for everyone involved.

Esvelt is an Assistant Professor of the MIT Media Lab, where he leads the Sculpting Evolution Group in exploring evolutionary and ecological engineering. In 2013, he was the first to identify the potential for CRISPR “gene drive” systems to alter wild populations of organisms. Recognizing the implications of such an advance, he and his colleagues chose to break with scientific tradition by revealing their findings and calling for open discussion and safeguards.

An outspoken advocate of freely sharing research plans to accelerate discovery and improve safety, Esvelt seeks to use gene drive as a catalyst to reform the scientific ecosystem. His work has appeared in major scientific journals, including Nature and Science, and is commonly featured in major media, including The New York Times, The New Yorker, and NPR. 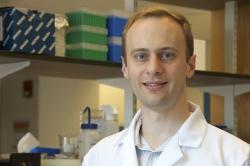