Refugees in Europe: Overture to a Global Crisis

The exodus of millions of refugees from the Middle East and North Africa to Europe has created challenges of unprecedented proportions. Civil wars, the violence of ISIL, failing states, and economic misery constantly produce new waves of refugees. How can we end the suffering of huge numbers of people, culturally integrate them into European societies, stem the rise of anti-immigrant right wing movements, and preserve Europe's greatest post war achievement in overcoming the conflicts of the past, the European Union? All of these challenges must be faced amid growing internal disagreements.

The United States is affected not only in its role as the premier immigrant country, but also in its responsibilities as a world power. A destabilization of Europe, America’s chief ally, would be a blow to American interests. Should traditional policies of dealing with refugees and a world in crisis be changed? Dr. Karl Kaiser will address this vital issue of global concern. Solutions to the crisis will require global cooperation and, consequently, constructive American input and leadership.

Karl Kaiser is Adjunct Professor of Public Policy at the Kennedy School and Senior Associate of the Program on Transatlantic Relations of the Weatherhead Center for International Affairs of Harvard University. He taught at the Universities of Bonn, Johns Hopkins (Bologna), Saarbruecken, Cologne, the Hebrew University, and Harvard. He was a Director of the German Council on Foreign Relations, Bonn/Berlin, was an adviser to Chancellors Willy Brandt and Helmut Schmidt, and a member of the German Council of Environmental Advisers. He serves on the Advisory Board of the American-Jewish Committee, Berlin. He is a recipient of the Atlantic Award of NATO.

Following Dr. Kaiser's talk, all are invited to a reception at the Mariposa Museum for refreshments and to view an exhibit on refugees. 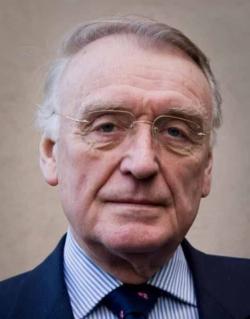