The Story Only You Can Tell

Those of us inspired to write often wonder: what is the value of telling my story - does anyone really care? Joyce Maynard, the author of numerous novels and memoirs, would say that telling the truth about one’s life is always valuable. Maynard, who has been documenting her life experiences for five decades, is committed to mentoring developing writers, from whom she learns as well as teaches. She will share her practical, dynamic, and inspiring thoughts on the art of authentic storytelling, and will address the issue of whether a writer should ask permission before telling the truth.

Maynard, a New Hampshire native who currently lives in Greenfield and is attending Yale University, began publishing her stories in magazines when she was 13. Since then, she has written 18 books, including the memoir At Home in the World and the novels To Die For and Labor Day, both of which were adapted for film. Her latest novel, Count the Ways, was named by The Wall Street Journal as one of the top novels of 2021 and was awarded the Grand Prix de Littérature in France, for the best novel published by an American writer. Maynard, a MacDowell Fellow, thrives on leading memoir-writing workshops, and is currently at work on a new book about being an undergraduate at Yale in her sixties.

In addition to her life as a writer, Maynard also teaches the art of making pie crust, finding it to be a metaphor for many of life’s experiences. And she climbs Mt. Monadnock every fall, stating that, “For me, a mountain is where a person can bring sorrow or celebrate joy. Every time I reach the top again, I remind myself: I am a survivor.” Maynard remains inspired by truth: “It is the unassailable thing and you can’t fake it.”

Moderator Corinne Chronopoulos is the Executive Director of the Peterborough Town Library, a role she has served in since 2014. Corinne led the effort to renovate and rebuild the Town Library, which celebrated its grand reopening in September 2021. She has a Master’s in Library Science from Simmons College and completed her undergraduate studies at the University of New Hampshire. She is a volunteer with the Emergency Monetary Assistance Coalition in Peterborough, where she helps coordinate assistance to those in need. 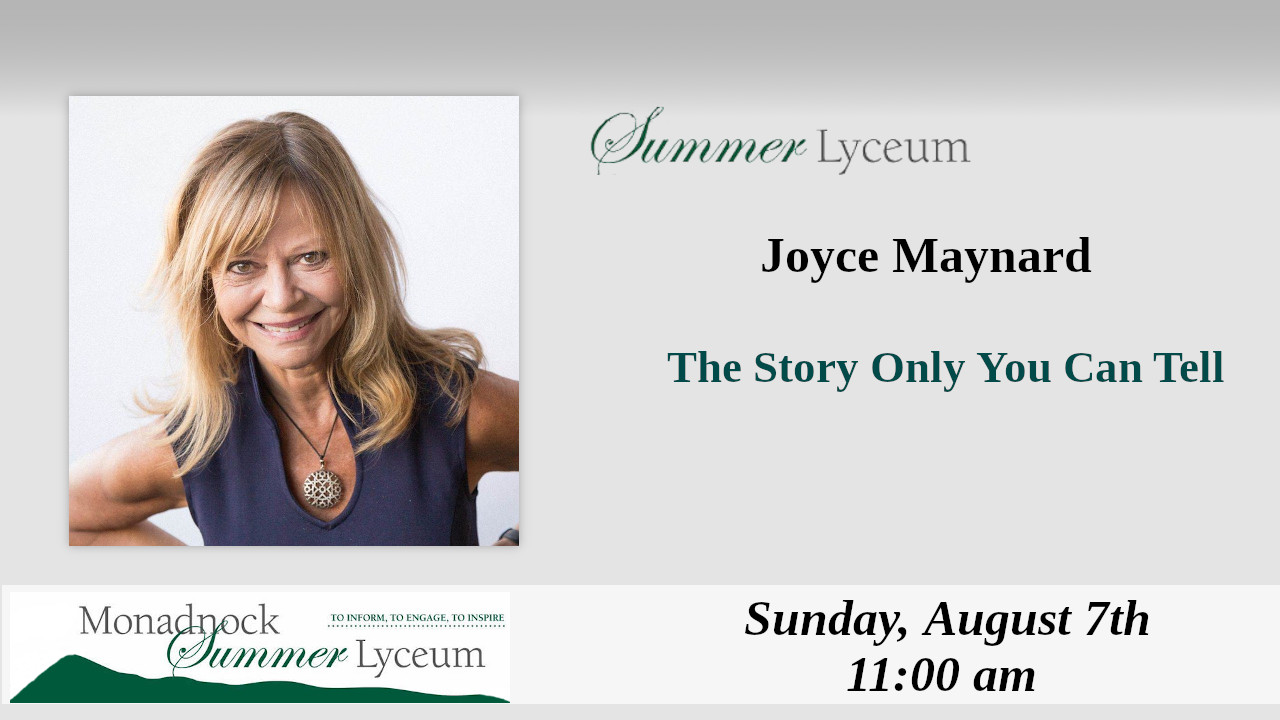