A Troubled Sleep: Risk and Resilience in Contemporary Northern Ireland

From 1968 to 1998, in a period of time euphemistically known as “The Troubles,” violence ruled Northern Ireland.  Today, 50 years since The Troubles began and 20 years after they “ended,” what is the state of contemporary Northern Ireland? Are the sociopolitical vulnerabilities exposed by the prolonged x-ray of The Troubles still present?  Or has Northern Ireland rebuilt differently enough to ensure non-recurrence of violent conflict? Has the conflict been transformed into a win-win situation for both sides? Does Northern Ireland have the resiliency to withstand the internal and external stressors that may threaten a destabilization of its fragile peace?

James Waller has spent over 110 hours of original face-to-face interviews with politicians, activists, community workers, former political prisoners, former and current paramilitary members, members of dissident groups, academics, journalists, mental health practitioners, tour guides, school teachers, museum curators, students, police and military personnel, legal experts, and religious leaders across Northern Ireland. Waller will offer a sober analysis of the country’s contemporary risk and resilience.  This analysis is informed by his previous work on risk and resilience in regard to conflict and atrocity prevention. While there is certainly a lot to learn about Northern Ireland as a post-conflict society, there is even more to learn from Northern Ireland.  It can be argued that the country’s past and present are a mirror to that of the world and our shared futures.

Waller is Cohen Professor of Holocaust and Genocide Studies at Keene State College and the author of five books, most notably his award-winning books Becoming Evil: How Ordinary People Commit Genocide and Mass Killing and Confronting Evil: Engaging Our Responsibility to Prevent Genocide.  His sixth book, A Troubled Sleep: Risk and Resilience in Contemporary Northern Ireland, is scheduled for release in late 2019. 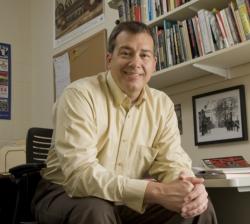